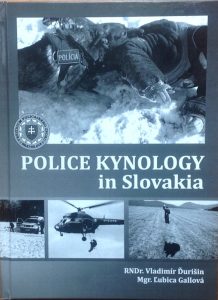 Nowadays, the book market has been enriched by the English version of the monograph of the Police Kynology in Slovakia – Policie Kynology in Slovakia. Authors, RNDr. Vladimír Ďurišin and Mgr. Ľubica Gallová, worked out a publication presenting highly interesting, professional and social views from the position of Police Kynology creators in Slovakia. The Slovak version of the monograph translated into English Mgr. Mária Ďurčová.
The processing of the subject in the book form was based on the classic work from the history of the beginning of Police Kynology on the territory of Slovakia. It presents a description of the creation of the creative period of Kynology over several periods of time, interesting for a large-scale Kynology community. The monograph in the text part deals very much with the institutionalization of Police Kynology, the effectiveness of her work, the uniqueness of the relationship between man and the dog, the use of the dog in various and numerous areas of police activity. He sensitively points to the broad socio-human dimensions of the relationship man-dog.

Particularly positive and beneficial is a detailed and direct description of the training of police dog handlers, building on the training and results of the use of dogs in police practice. The authors describe in detail the course of training and training of service dogs for classic and special odor work, i. from basic footsteps to top performances in search of drugs, weapons, and so on.
Since the monograph is about the Slovak Police Kynology, it describes in detail the problems of breeding police dogs in our country, the suitability of breeds of dogs for this work, the need for general and veterinary care.
An interesting chapter also deals with the education process and the direct teaching of Police Kynology at the Academy of the Police College in Bratislava, pointing to the importance of creative foreign police cooperation through international projects, direct competitions and meetings of cynologists.

„Police Kynology in Slovakia“ is also a collection of expert knowledge and approaches that are highly sought after in civilian kynology societies, clubs and training centers. The book presents individual specialized forms of training and activities that can be used in the civil sector as well. This „feature“ of the monograph makes it desirable and sought after for reasons of valuable picture documentation. The presented texts of the monograph can also be included as a suitable study material for the international Erazmus program, and for novice and advanced kynologists.
Police Kynology in Slovakia is an appropriate presentation of Slovak Police Kynology from its beginnings to the present. It is also a picture of the work of a longtime kynologist and, above all, a creative worker of the Slovak Police Kynology.