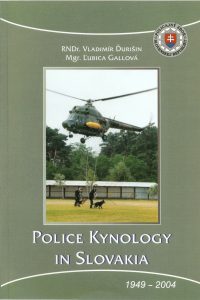 The Department of Kynology Presidium of the Police Corps issued in 2004 the monograph „Police Kynology in Slovakia“ by RNDr. Vladimír Ďurišin and Mgr. Ľubica Gallová. It is thematically a publishing first that has so far absent in the Slovak book market. The book illuminates the main stages of the development of the Slovak Police Kynology, brings memories of the members who were at its inception, points to its successes in service, and contemplates further trends in its development after the accession of the Slovak Republic to the European Union.

The monograph talks about what characterizes Slovak Police Kynology for its 60th anniversary. She recalls her beginnings, the problems she has been struggling with, and the success she has achieved on both the domestic and international police Kynologyscene.

Authors, Director of the Department of Kynology and Hipology Presidium of the Police Corps col. RNDr. V. Durisin and publicist Mgr. Ľubica Gallová believes that the monograph „Police Kynology in Slovakia“ will find its readers in the professional but also in the lay kynological public. They also hope that the new title will fill the white space on the bookshelves, where the publication of this issue has been absent to date.